DERRIAN GOUBERNE SHOWS IT OFF DURING THIS GYMNASTIC ROUTINE. HER ENERGY IS HIGH, AND HER DANCE MOVES ARE ON POINT. AFTER PRESENTING TO THE JUDGES, DERRIAN EXITS THE FLOOR BY PLACING AN IMAGINARY (AND WELL-DESERVED) CROWN ON HER HEAD.

Derrian Lashun Gobourne was born on January 10, 2000 in Killeen, TX to Derric and Tikisha Gobourne. Currently, she lives in Sarasota, FL with her parents and she has two brothers, Marquis and Derric and one sister, Dierrica. Derrian is a senior at Florida Virtual, a homeschool program that allows Derrian to have more flexible schedule with training and schoolwork.

Only a few months after she started gymnastics, she competed in her first gymnastics meet as a level 4 gymnast. Almost one year later, she quickly moved up to level 6 for the 2009 season. She placed first on uneven bars, floor exercise and in the all-around at the Tampa Bay Turners Invitational. At the Florida Pre-Opt State Meet, Derrian placed fifth in the all-around and first on uneven bars.

In 2016, Derrian started the season by winning five all-around titles in five out of six invitationals. At the Region 8 Championships, she once again won the all-around title with a 38.350 and also earned silver medals on vault, uneven bars and balance beam and a bronze medal on floor exercise. She qualified to the JO Nationals in Ft. Worth, TX for the fourth time. At the Nationals, she placed fifth in the all-around with a 38.375, second on uneven bars, fourth on vault and seventh on floor exercise.

No moment is too big for the sophomore. Last Friday, Auburn gymnastics trailed Alabama going into halftime and continued trailing going into the final rotation down 147.500 to 147.400. Gobourne, a freshman, scored a 9.95 on vault and ultimately shared the crown with LSU’s Kennedi Edney, UCLA’s Kyla Ross and Oklahoma’s Maggie Nichols.

“It’s just makes me realize how good I am. I belong here,” Gobourne said. 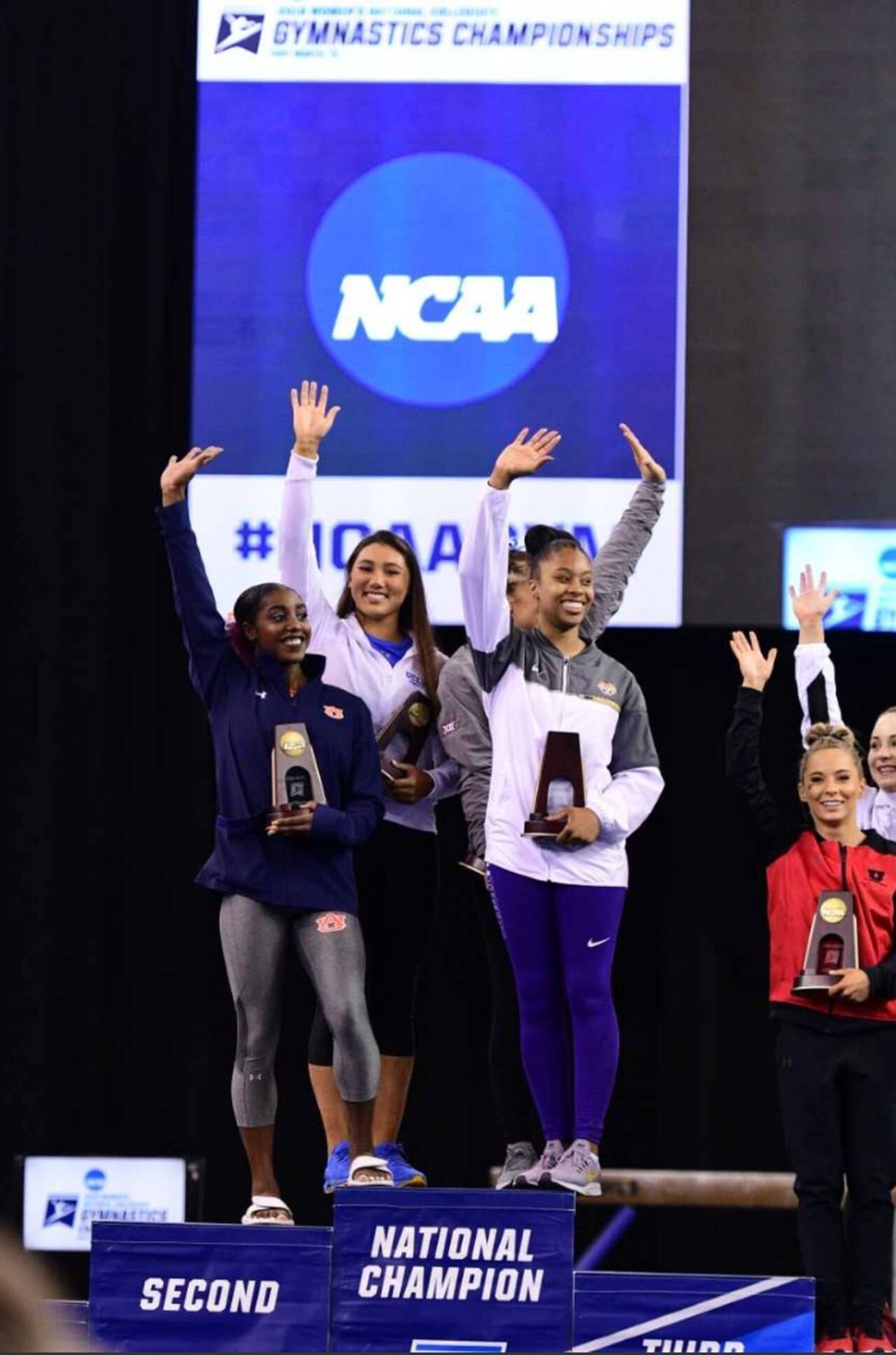 She knew her score could make a cataclysmic impact and seal the win for Auburn. That feeling of knowing your best performance could win it all for your team, that’s what athletes live and breathe for.

"HER ENERGY IS HIGH, AND HER DANCE MOVES ARE ON POINT"

Derrian shows it off during her floor routine routine. Her energy is high, and her dance moves are on point — not to mention she flat-out sticks the landing on her last tumbling pass, a high-flying double pike, at the end. After presenting to the judges, Derrian exits the floor by placing an imaginary (but well-deserved) crown on her head.

@DGobourne put on a show with her floor routine!"

Auburn University sophomore Derrian Gobourne, who tied with three others for the NCAA vault title last year, has a Queen Bey routine set to some of the artist's greatest hits: "Flawless," "End of Time," and, one of my personal favourites, "Countdown." You'll hear "Flawless" in the beginning, "End of Time" leading up to her second tumbling pass, and finally "Countdown." Mixed throughout, also, is a band performance reminiscent of Beyoncé's Homecoming: The Live Album recorded at Coachella in 2018.

HOW CAN YOU OPEN YOUR HIPS WITH YOGA?

THE GREEN JUICE RECIPE OUR CEO SWEARS BY